Sex And The City 2 + Marlies Dekkers

It's finally in theaters today "Sex And The City 2" that we have been impatiently waiting for! How many of you want to know all the secrets about the dresses, accessories, gadgets and everything Carrie Bradshaw and her friends will wear in the movie? What about the lingerie? Well, you will notice Carrie wearing Dutch designer Marlies Dekkers famous signature bra towards the end of the movie. 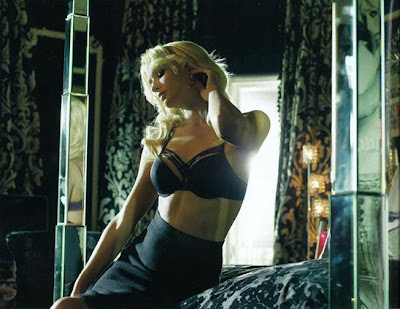 We believe this is the bra (Dame de Paris style) (to be confirmed) worn here by Paris Hilton for Esquire Magazine. photo credit: Eric Ogden

"The Sex and the City girls became true icons, I don't believe there is anyone, female or male, not knowing these New York fab 4. As only the clothing and shoes of the mayor international designers are included in the film. I am very proud to be one of them", says Marlies Dekkers during an interview.

More and more power women from the U.S.A. such as Lady Gaga, Rihanna, Fergie, Britney, Dita Von Teese and Paris Hilton are spotted wearing the marlies|dekkers fashion lingerie. Marlies Dekkers feels very proud that her designs now also can be found in the walk-in closets of the famous Sex and the City girls.

To watch the just released extended version of the SATC 2 trailer click play below: