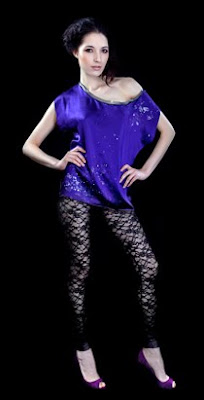 Designer Laura Mehlinger has been studying, designing and making clothing since the time she could hold a needle. Before launching Lola Haze™, she held design positions at Gap, Inc. Laura received her BA from Harvard in English. She was called "Harvard's Ace Student of Fashion" by the Boston Globe for creating and showing her own line of women's wear in the only one-person fashion show there in memory. She named her line after the title character in the novel Lolita, which she wrote her thesis about and which continues to intrigue and inspire her.

"Design is molding juxtapositions: elegance and kitsch, innocence and seduction, playfulness and sophistication, and for Lola Haze™, public and private. I love lingerie because it dances between public and private domains. It can be a woman's own secret that makes her feel special or something beautiful for display. Lola Haze™ is for a playful, confident woman who loves the transformative power of clothing and dresses for herself. She can wear Lola Haze™ as innerwear, loungewear, or outerwear."